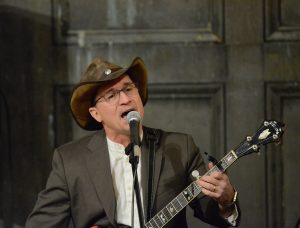 Paul Sedgwick started playing the banjo in 1973 at the impressionable age of thirteen because 1.) he hoped to one day meet Elly May Clampett, fall in love and get married; 2.) there was nothing more thrilling than when Bonnie and Clyde were on the run from the police and Earl Scruggs’ “Foggy Mountain Breakdown” kicked in; and 3.) in 1973, “Dueling Banjos” was being played everywhere, even on Rock and Roll radio stations. His initial interest in Bluegrass banjo soon blossomed into a passion for all things banjo. He has studied and researched the history of the banjo (he travelled to West Africa twice for the express purpose of learning to play and make the “ekonting” of the Jola people of southern Senegal); and he has made presentations on the history and development of the banjo in the United States. Over the past ten years, an initially passing interest in the ukulele has developed into a passion for the uke which rivals his dedication to the banjo. Paul attended South Plains College in Levelland, Texas where he earned a degree in Bluegrass Music in 1985! He plays regularly in two bands: WAYNE POTASH AND THE MUSIC FUN BAND—a children’s band; and the LEMONSHINERS, an indie-Americana band. He holds a BA in Dramatic Art, an MFA in Playwriting, and a Master’s in Education, in addition to that (coolest-of-all) degree in Bluegrass Music.

For more about Paul Sedgwick, check out his website: www.paulsedgwick.com